New Zealand is a lovely, friendly place, but you have to go through lots of security both entering and leaving, and it was the only place where they weighed our carry-on baggage, so we had to do a repack, thinking we might have to mail some stuff home, but ended up boarding the plane wearing several jackets and with all our books in our pockets. The flight was long and strange in that we moved our watches on 3 hours and back one day. We were very happy to arrive in our hotel in Santa Monica, shower, change and go for a stroll in the warm sunshine. Katharine was thrilled to buy two pairs of new lightweight shoes and abandon her battered old ones. We walked along the Pacific Palisades and back via the beach, where Richard had played as a small boy.

The Pacific Palisades from our hotel bedroom

The following day the weather was even nicer so out with the summer clothes again. Richard’s cousin, Jackie, called for us with her driver and took us for a very pleasant lunch in her country club before dropping us off at the Getty Museum, a huge and fascinating place.

Downtown LA in the distance from the Getty Museum

We went on the 40-minute garden tour, which included information about the architect and architecture, and was very interesting in its detail. The views all round are very dramatic. Then we went round an exhibition of stained glass from Canterbury Cathedral with pages from a Psalter originally from Bury St Edmunds. The journey back to the hotel by bus in the dark was confusing, but we got there in the end.

Santa Monica was very good for shopping, especially with the post-Thanksgiving sales, but we had to remember our weight limit. The pedestrian shopping area is very attractive with many shops, cafes and restaurants.  We enjoyed an excellent lobster dinner on the seafront.

We had decided it would be fun to travel to San Francisco by train, so we took the bus to Grand Union Station,

where we did a lot of waiting in line, but eventually found our seats on the upper level of the Coastal Starlight Express. It was a great journey, along the coast on the cliff edge – where we saw dolphins and various seabirds as well as raptors – and through the mountains. At one stage we went up into the interior and doubled back on ourselves, seeing the other end of our train. We had been warned that it would be slow, and it was.

The journey should have taken 11 hours, but there were a couple of medical emergencies (‘Is there a doctor on the train?’) plus a signal failure, so, having left at 10.10am we finally pulled in to Oakland at 11.30pm – and then had to get the shuttle coach to San Francisco and our hotel, arriving about 1am. The bed was very comfortable and we slept very well.

We had two whole days in San Francisco, so were able to walk round quite a bit. 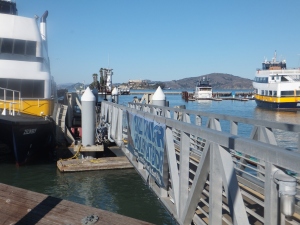 We especially liked the Ferry Terminal, which has been renovated and now houses lots of interesting shops as well as the ferries. It was there that we met Richard’s cousin Richard (Jackie’s son) and his wife Geri, who treated us to a very nice modern-style Vietnamese lunch. We visited the cable car museum, and the next day rode on a cable car, which was fun. We also took the ferry to Sausalito, a pleasant little seaside town on the other side of the Bay. 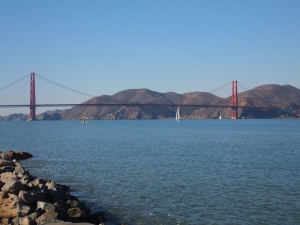 On our final day we tried to walk to the Golden Gate Bridge, but took the wrong bus, and ended up having too far to walk, but did find the Palace of Fine Arts, a restored survivor of the 1915 Panama-Pacific Exposition, in a park with a small lake with various wildfowl including lots of Black-crowned Night Herons roosting in the trees.

After a quiet, late lunch we took the shuttle bus to the airport where our big cases were not over weight and they didn’t weigh our carry-ons.

The flight home was uneventful, and we arrived back in Heathrow in plenty of time for our coach back to Winchester. We had had a terrific holiday, meeting old friends and family and making new ones, seeing amazing places, spotting lots of wild-life – Richard was totally birded out – and indulging in some pleasant retail therapy, but it was great to be back home after exactly 8 weeks away,  and know we’d be in our own beds for several nights to come.