Great to arrive safely after a reasonably comfortable 11-hour flight. Then the bus to the hotel took an hour. The Harbourview Hotel was comfortable and had a splendid view over the harbour. Our hotel is the building in the middle, and then this is the view from our room by day and by night. 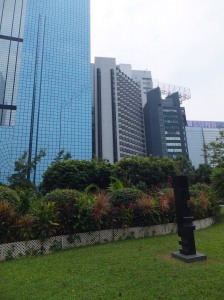 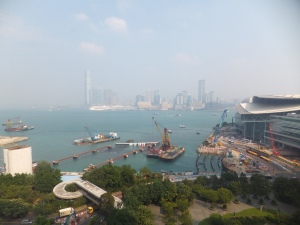 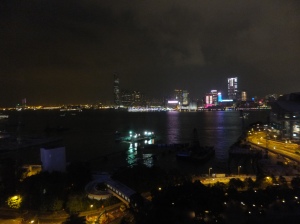 The first evening we walked all around Wanchai and found a very nice seafood restaurant: grilled lobster in garlic sauce, squid deep-fried in an aromatic sauce and steamed kale. Then a walk round the bars (red-light district!) for old times’ sake (Richard not Katharine). K was a bit intimidated by all the very high buildings, bright lights, big city.

Sunday morning K was bird spotting from the hotel window: a couple of kites over the water; a white egret (little egret?) out on a boom in the harbour; a two-tone grey heron in the park below the hotel, several sparrows and pigeons, something that looked a bit like a roller, dark coloured, with a long tail, and a couple of others. Much to look up when we get back home and find an appropriate book.

A market stall in Wan Chai

Sunday was hot and fairly humid, so we went for another walk, not too easy as there is a major new development being built by the harbour which meant we kept running out of footpath, not to mention discovering we should have taken several overhead walkways. But we reached the shops in Causeway Bay and ambled around Victoria Park. Then we found our way back to the Star Ferry in Wan Chai and crossed to Tsim Sha Tsui (Kowloon side.) Lots of people around as it was a public holiday. Lots of groups of young women picnicking in the parks: probably maids with a day off. We walked along the ‘Promenade of Stars on the waterfront’, stopping to admire the statue of Jacky Chan, and then collapsed into comfy seats at the Deck ‘n Beer for a pint of ‘San Mig’, gathering our strength for a shopping session.

After a shower back in the hotel we sallied forth into HK Central to find a restaurant. Once again we kept getting lost, and the restaurant Richard had looked out wasn’t where we thought it should be, so we found a very fine traditional place in Wellington Street, Central, which was on several floors, but packed out. So we wandered round Central for about half an hour and then claimed our seats. More excellent seafood – squid in black bean sauce with peppers, vegetables with crab meat and Singapore noodles. Back to the hotel in time to see the last of the light show over the high-rise buildings.

Met our friend Annie at 1030 and took the MTR to the HK Museum of History in Kowloon.  An excellent museum at which we  managed only the ground floor out of three.  Then to the Serenade restaurant on the waterfront for Dim Sum. Then back to Wan Chai to look at the street markets. In the evening Annie and Rocky took us out for a splendid dinner at the Hong Kong Jockey Club, a great treat.  Afterwards our friends drove us up to the peak for coffee and the amazing light show over the high-rise blocks on both sides of the harbour.

Hong Kong at night from the Peak.

We met our friend Siemen at 1030 and we set off for the Bonsai Park in Kowloon.

Buddhist monastery behind the bonsai park

One of a collection of highly valuable decorative rocks

The bonsais here are not small like Japanese ones, but are about 4/8 feet high.

After a splendid vegetarian lunch in the Bonsai Park, we drove to Stanley market back on HK on the rural south side by the coast. We came back via Repulse Bay and Deepwater Bay. No time for the planned foot massage as we had to shower and change before meeting half a dozen OWs for a drink. After that met Siemen and Carter again, together with Lynne, and we were royally entertained in a Japanese restaurant where all the ingredients had been flown down alive from Japan that very morning and cooked in front of us (not for the squeamish.) Wow!