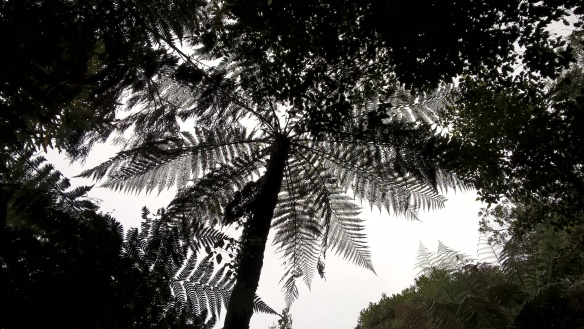 Under the tree ferns

The flight from Nelson to Wellington was reminiscent of travel in an earlier and more innocent age. We arrived at the airport, checked in with the ground stewardess and handed over our bags. When it was time to leave we gathered round the stewardess who counted heads and then led the 8 of us across the tarmac to the ‘pencil plane’, a single prop 12-seater operated by Sounds Air. She helped us get strapped in, then the pilot introduced himself – no separate cockpit, just up at the front of the plane – and off we flew. It wasn’t nearly as scary as Katharine had expected; in fact it was a very smooth flight, and as we were flying quite low we had an excellent view over the mountains and then the sounds before we crossed the Cook Straits and flew into Wellington. Very different from the usual flying experience.

The plan had been to spend some time in Wellington and visit the WW1 diorama (Peter Jackson) but the museum didn’t open till later and the traffic was heavy, so we decided to take the scenic route round the bays and stop for breakfast in a friendly cafe overlooking the water. Then we went on to Waikanae, where our friends live in a pleasant spot with a lovely sheltered garden. After lunch they took us to visit friends of theirs who had bravely bought a rather boggy and unlovely paddock 20 or so years ago. Somehow they had seen the potential in it, and now they have a lovely house at one side against the forest, with beautiful water gardens and native plants. The ponds have grass carp and the trees and shrubs are full of native birds. All the trees were blossoming or about to, and the whole effect was just stunning.

The next day we got up early ready for our day and night on Kapiti Island, a wildlife sanctuary about 5km over the water. But then came the phone call – too windy for the crossing. Great disappointment. So instead we made ourselves a simple picnic and set off for Mangaone South Road to walk along the Mangaone Walkway, which follows an old bush tramway in low hill country east of Waikanae. It was historically known as Reikorangi Track. The southern half follows the Waikanae River through Kaitawa Scenic Reserve, which protects previously milled podocarp forest. There are streams running through the area, now crossed by means of bridges. The northern end runs through farmland, and as the route isn’t circular, we walked about half of it before stopping for our lunch and then returning to the car.

One of the bridges

Out of the forest

The following day it was still pretty windy and threatening rain, so Kapiti was still not on. So we set off on a rather circuitous route, caused by the roadworks for the new highway, to Nga Manu nature reserve. This has a mix of aviaries and night areas for rarer or endangered species with open and wooded areas where birds fly freely. It’s very pleasant to walk around the different paths and areas, and we saw lots of native birds as well as huge longfin eels in the ponds: feeding them is one of the features of the reserve. There were plenty of waterfowl, including a number of Pukeko, some of which were very young and friendy.In the aviaries we saw Kea and Kaka, two of the big native parrots, as well as tuatara lizards. We even saw a brown kiwi trundling around in the night enclosure. 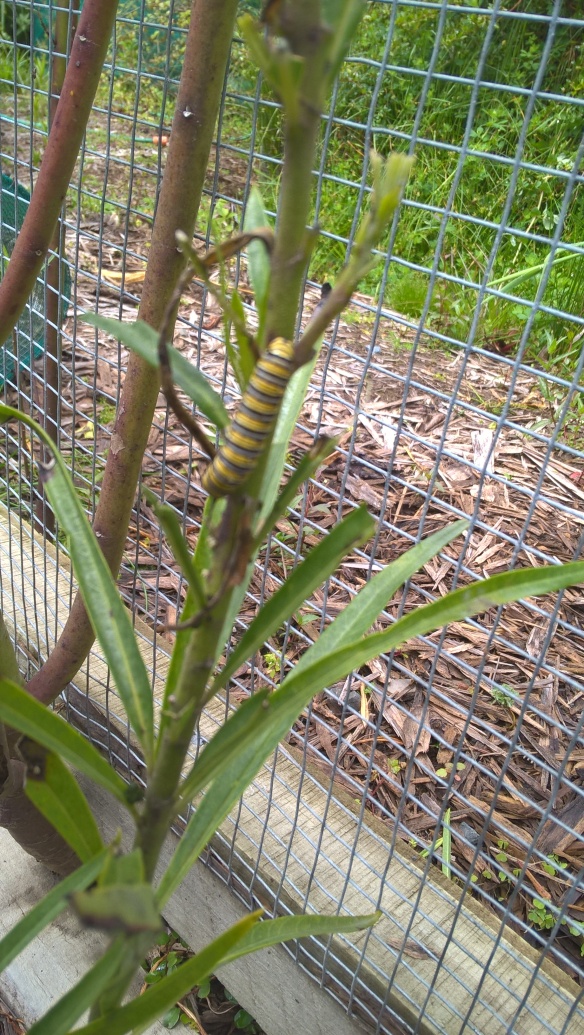 Monarch butterfly caterpillar – some of their food plants are pretty unpleasant, though not the swan plant

The largest fuchsia in the world – a tree

Christine talking to Dan, the tui who is too tame to live outside

A clump of cabbage trees 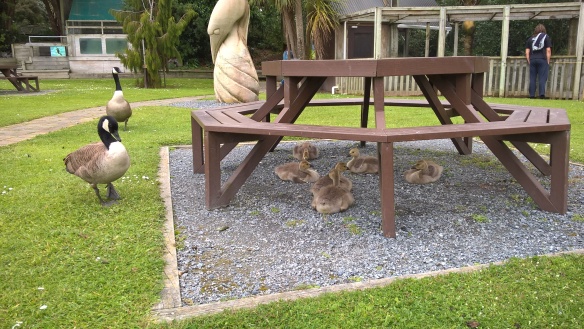 Black swan on the lake 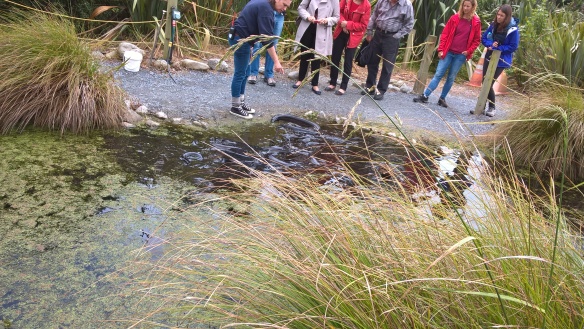 After watching all that feeding we left the park and went to have excellent battered fish with twice cooked chips at a cafe near the beach. Our stroll along the beach afterwards probably didn’t do much to walk off the calories!

Thursday morning was fine and sunny and the wind had dropped – so we were up early, down to the bakery to buy our picnic lunch, and on the boat to Kapiti Island, along with a school party and four other tourists. Once again we took our seats in the boat and were tractor-hauled into the sea, much to the delight of the school children. The crossing took about 20 minutes, and the 6 of us got off at the north end, where the forest is less developed than further south, as this was the most recent part to have been farmed. So there was a lot of Kanuka and Manuka, with the forest trees growing up beneath the canopy. In time the forest trees will dominate and the other plants disappear. This will also have an impact on the bird life. For now there are lots of whiteheads and fantails, the latter all displaying busily, rising and falling in the air, twirling round, and fanning out their tails.

It really was a beautiful day, and Kapiti is a truly magical place. We had a guide tell us about its history and the birds we might see, and then we set off on our own, round the inland path and up to the high point: sadly for us the gulls and royal spoonbill were nesting so we couldn’t take the coastal path. We could look down on the gulls but the spoonbill were out of sight. We had our picnic in a little clear spot near the cliff, with a view down to the beach on one side and to a cove where there was a colony of fur seals, which we could see swimming, on the other. A family of weka, two adults and two largish young, came and investigated us, hoping for some crumbs for their lunch. Then we walked back down to the lodge, where we would have had lunch and stayed had the weather not been against us. We enjoyed sitting in the sun and seeing a few more birds, including a Takahe, before taking the boat back to the mainland, where Christine was waiting for us. In the evening they had friends round for a delicious BBQ leg of lamb.

The tractor returning to the beach

On our way to Kapiti at last 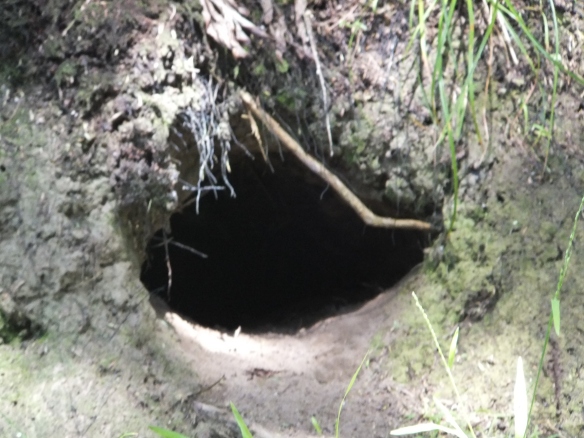 A kiwi burrow, sometimes borrowed by a little blue penguin 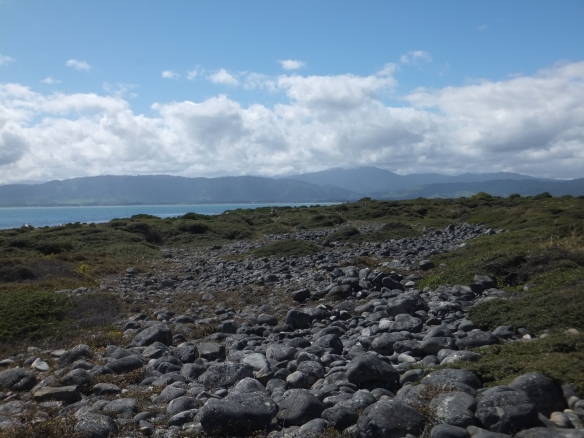 The boulder area on Kapiti island 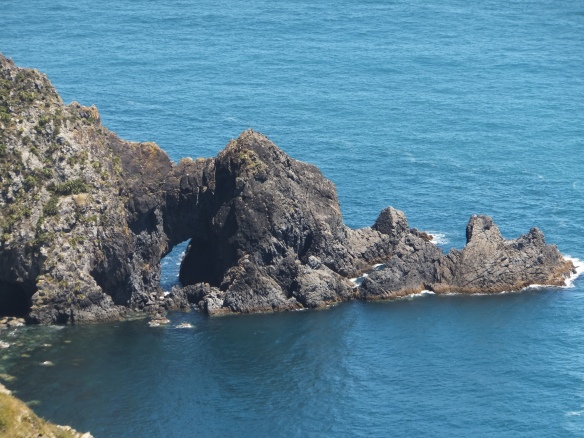 Looking down from the northern end 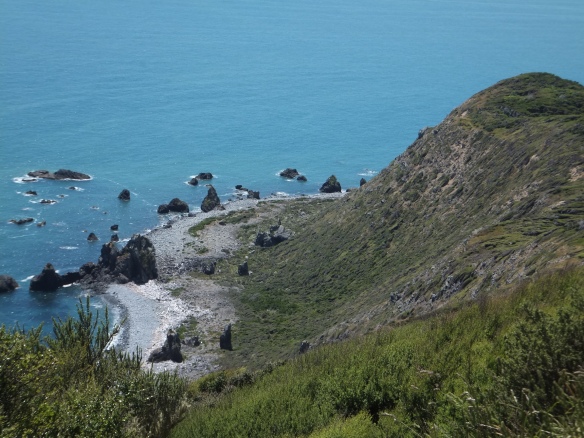 The other side of the little bay 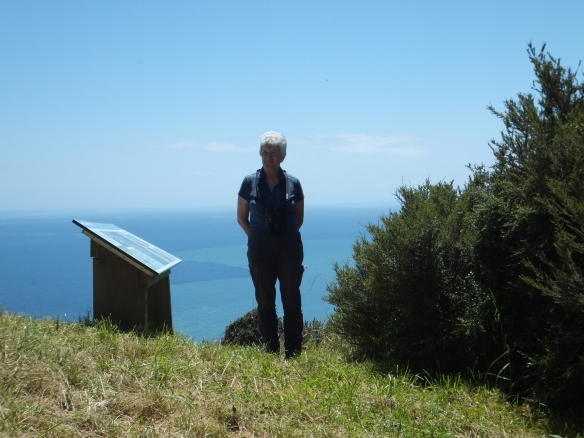 Katharine on top of the island

Back on dry land

The following morning  Murray took Richard out to see his new project, a pear orchard. Then we loaded our cases into the car, and Christine drove us to Wellington airport, to fly up to Tauranga. We had had a great time in Waikanae, and were quite sad to leave. 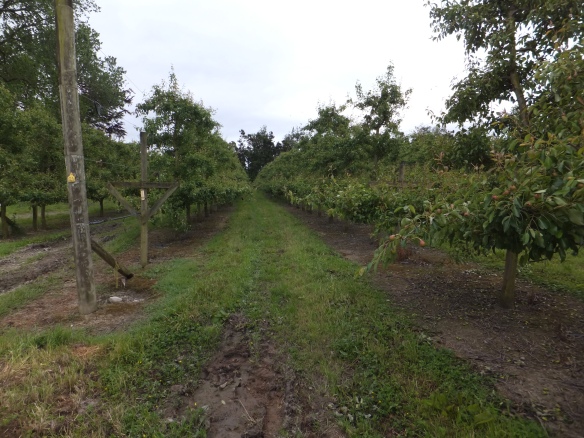